2021 Has Officially Made Me Take Care Of Myself and It's Not Awful, Actually

Been a while since I did one of these and it's just quite an exciting time in my life at the moment and I wanted to document it in a way that wouldn't disappear after ten days. More for myself than anyone.

Yesterday after four weeks of radio silence from my job after I was put on leave for deleting a sexist post, I quit. I told my boss that since I had come out and changed my name my colleagues had consistently put me down and that it was unacceptable anywhere but certainly when you work in Mental Health. I told him it had been entirely inappropriate when he asked me what my sexual preferences were and that as he was in his fifties he didn't need to worry.
As soon as I quit he got back in touch. Sorry fuckers I have found somewhere new! Now I'm training to manage a similar, more progressive (albeit smaller) group where everyone respects people's pronouns and all the people I have met there seem fab. Pure Shores baby!
With my time off I have really just been reading and listening to music. I haven't been too well but I'm managing to take better care of myself (brief relapse into SOMETHING fucky happening with my eating but I'm on it) and I've finally been able to make some plans with friends which has been wonderful. I saw this beautiful woman, my entire heart, for the first time in 18 months which was GLORIOUS. 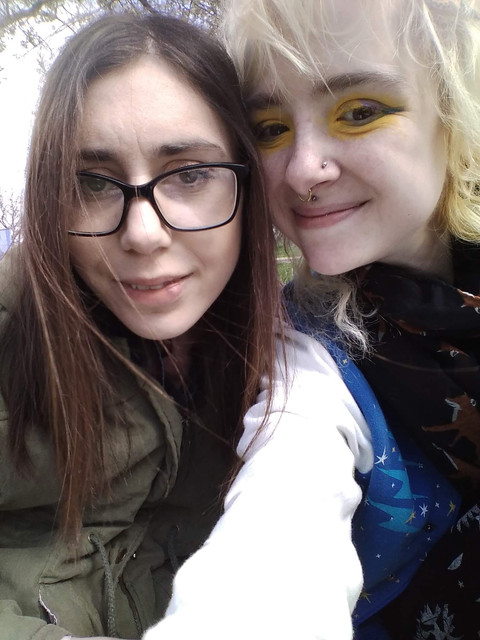 What a glorious day it was!
Other than that it all continues as normal Matt is still WFH and a massive dork but he is being very supportive with me trying to cut down on meat and is actually doing the same although the other night he did sadly sigh "fuck it", leave the flat and come home with a huge steak just for him. It had been a tough day! He is allowed to indulge sometimes.
Also I now have a six step skin care routine that I have kept up strictly for two weeks and I've cut down on alcohol and cigarettes.
So. 2021 has accidentally made me practice self-care which I haven't done ever in 27 years. Didn't see that coming at all.