Published by CL The Raccoon

Category: Dreams and the Supernatural 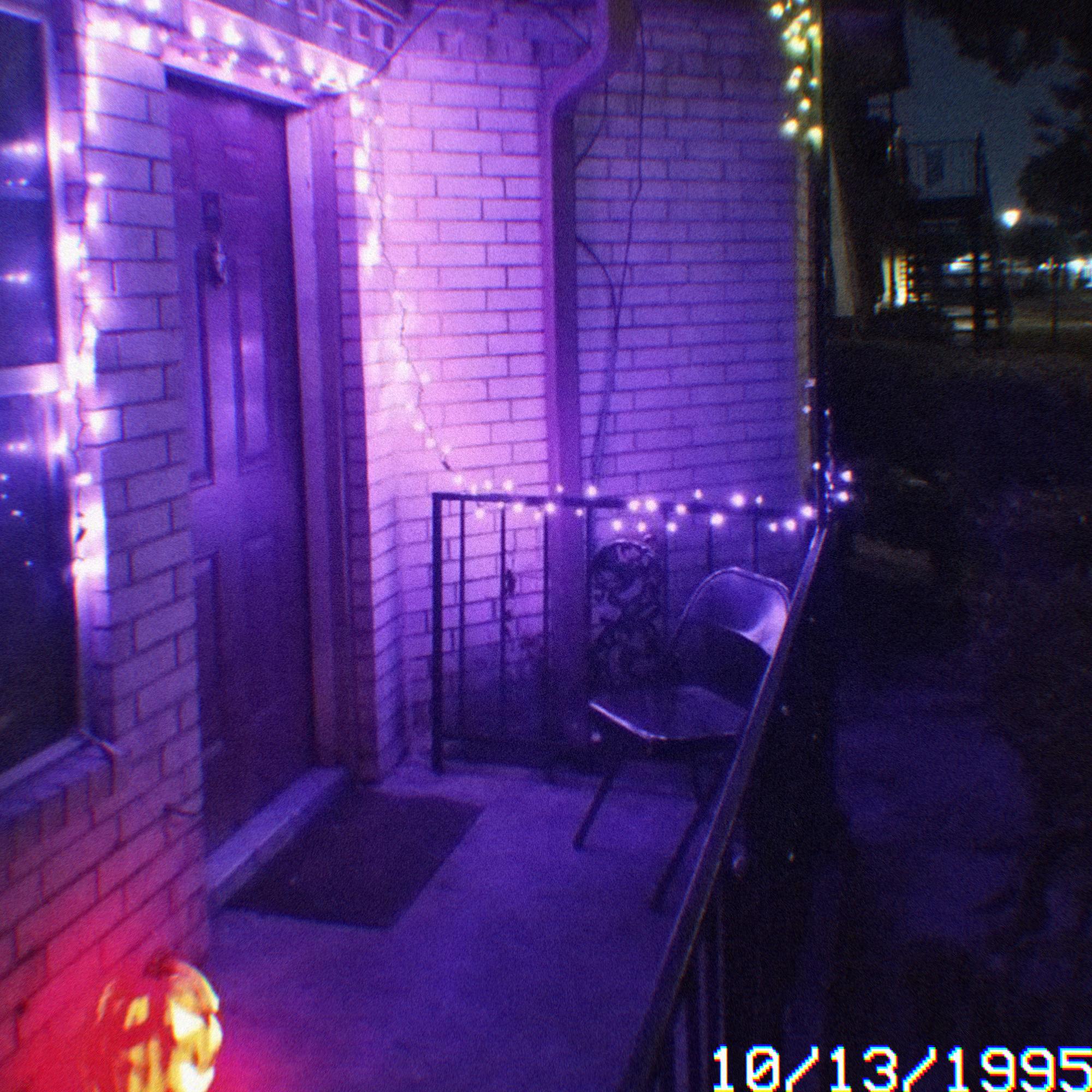 A couple weeks ago, I was talking with my mom about past Halloween experiences. She talked to me about a Halloween party at our old apartment when I was 2.

It was October, Friday the 13th in 1995. My dad worked at a Blockbuster back then and he brought home a copy of Batman Forever on VHS a couple weeks before it was meant to officially come out.

"I can vaguely remember that party." I told her. I remember my mom and her work friends laughing while playing a board game, I think it was Taboo or something. I remember watching the Batman Forever tape in my dad's lap on our old big screen Zenith TV while he spaced out. I actually vividly remember Seal's Kiss From a Rose music video played after the movie was over and I remember loving that song, hell I still do to this day. I remember my older brother's clown costume and him chasing me around in it while I cried. I was scared of clowns all the way up till I was 14 because of that.

Besides all that, the party was more or less a blur in my mind, I don't remember the other guests nor whatever else we did that night.

"Yup! I remember you later played that tape over and over until it couldn't play anymore. I think you came up to me one day and were bawling like a banshee when you showed me that the tape was all tangled from being eaten by the VCR." My mom said while giggling to herself. "Do you remember the dream I had that night?" I asked her after we reminisced about the good times. She looked at me confused at first, but then I saw the look on her face and she went pale. "Honey, you know what your doctor said about remembering that. You should only talk about it if it's been happening again." She said, while putting a hand on my knee, a look of concern across her face before continuing. "Is it happening again?"

I shook my head. "No, mom. I'm just saying that's all." I replied, solemnly. "Then don't worry about it. It's best to forget those dreams." She said, her look of worry fading slightly. Though regardless of her or my therapist's words, I never could. Of course as time bore on I was able to think about them more clearly.

'Dreams are one of the only gateways we have to the subconscious. They tell us about something you're dealing with emotionally or internally.' The therapist's words echoed in my mind as I closed my eyes and leaned back on my mom's sofa.

"It's getting pretty late, I think I'll be heading home now." I said as I got up. She did the same and walked me out to my car. She looked tired, but content knowing that I was okay.On the drive home, my mind hazed with memories of the past. Of a time that was equal parts innocent and terrible.

I looked back on the first dream, the one that started the whole thing, the dream that began a saga of nightmares that never truly stopped. I remember, after the party my brother and I were put to bed for the night. My eyes quickly grew heavy and I was fast asleep.

I was in the clearing of a forest. The wind was whistling through the grass, the night sky was vivid purple and the air was crisp and cool. Trees surrounding the clearing were swaying with the breeze, even for my young toddler mind, the setting was calm and soothing. Then I heard it. Laughter. One voice at first, then many more! I focused my eyes on the trees, they were full of swirling leaves, shaped like what I'd later learn were called Mandelbrot fractals. Each trunk had a face and all the faces looked up at the night sky, smiling. They shook with the rhythm of the laughter. The trees were laughing! Not at me, mind you, but at the purple sky. I wondered to myself why the purple sky would be funny, but their laughs were infectious so I began to laugh with them. The trees stopped laughing, and everything got quiet. The wind stopped whistling and the air became still. I looked on in both confusion and worry as the faces on the trees all looked to me slowly, in unison.

It was then when I woke up.

Time wore on, and blurred into the forgotten tedium of a toddler’s day to day and the dream slowly faded into my subconscious.

Halloween that year was the first Halloween I remember vividly. By first Halloween I mean that it was the first I actively participated in, being too young the year before to even remember my literal "first" Halloween. I remember walking in the neighborhood next to our apartment complex, my hand in my mom's as we went door to door trick r' treating. My mom and I were dressed in cow onesies that matched and my brother was dressed as the green Green Power Ranger.

It was getting late, and my brother wanted to hit up a few more houses before we went home.

Three things stuck out to me at that moment. There were no other kids around, the night sky was purple. And it was deathly silent. I began to cry and wail, scared out of my wits. My mom picked me up and hugged me, asking me what was wrong. I was inconsolable, wide eyed and terrified at something neither she or my brother could ever understand at the time. "Trees!" was all I said between wailing sobs. I couldn’t stop saying it, louder and more frantic before my mom decided to grab my brother and run home with the both of us.

By the time we were inside the apartment, I was still frightened but not frantic. My mom asked what was wrong back when we were trick r’ treating, kneeling next to me as I sat on the floor, eating some skittles. “Da trees, mama.” I said with a mouth full of candy. “What about them, baby?” She said with a soft smile. I looked her dead in the eyes and spoke softly. “dere mean to me.”

That night I had another dream, but even in my young mind I knew it this time to be a nightmare.
I was in the clearing again, but it was different. The air was stagnant and bitter cold. The rancid stench of decay permeated all around me. The grass was dead and tinged a deep crimson and orange like that of dying coals in a chimney fire. The sky was as black as soot and swirled a roiling super cell of obsidian clouds overhead. Not a single iota of the once whimsical dream-like state I was in once before remained. I felt a foreboding presence all around me and my heart dropped. “T…T-trees.” I murmured out with a whimper as I looked all around me. Flanked on all sides were the trees, but even they were different now. Their fractal-like leaves were gone, leaving behind spikes where they once perched. Their faces were contorted into that of snarling grimaces with the malice of madmen. Their mouths, once flipped up in humor now sat drooping with wooden, splintered teeth. Their maws dripped caustic, black drool as I saw them begin to uproot themselves from the fetid ground and approach me.

My legs gave out under me and I plummeted to the fiery red grass, shrinking down as far as my terrified self would allow and cowering as they drew closer and closer. Their branches moved forward in a phalanx of wood pikes toward me and I looked around trying to find an opening I could run through. All I found was a continuing wall of dead wood surrounding me on all sides and moving closer in by the second. All I could do was cry, so I did. Wailing in fear as the trees drew closer. That’s when I heard it. The trees, they began crying too! A mimicry of my own, at the same speed and pace of my sobs. They sounded as terrified and fearful as me, but even so they still drew nearer.

Their wooden spears were mere inches from me before I wailed the loudest I could as I felt one of the wooden spikes pierce into my chest on the left side! The burning pain of sharp wood sliding into my flesh roughly vivid enough to wake me up from the nightmare.

I still have the scar from that night. Right next to my bicep and below my collarbone. When I woke up screaming in pain and fear my mom ran in, those motherly instincts kicking in like lightning. She freaked out when she saw all the blood on the bed and rushed me to the hospital. Next thing I remembered after that was waking up in the ICU. My memories are fuzzy from there.

I do remember overhearing the doctors talking with my mom and dad though. They said it's a miracle I survived. If that wound were only an inch upward, it would have hit my heart, square in the left ventricle. What was even stranger, the slivers of wood found inside the wound when they were cleaning it. “It’s the strangest thing!” The doctor said with a perplexed look in his eyes. “It’s as if he were stabbed with… a dowel rod, or something like that. How did this happen again?”

My mom and dad just shrugged, just as perplexed with the whole situation.

Now we talk about the freak accident where I got stabbed by something in my sleep and got lucky it didn’t kill me! A story to tell to the family.

Do you know what scar is worse than a puncture wound full of splinters inexplicably next to your heart? It's knowing full well what did it, no one believing you and having to keep it to yourself so no one thinks you’re crazy. But I know what stabbed me. And monsters like those… Well, they never really left.